Most cities in Italy reflect the food, wine, art and design of a particular region and then there is Venice. A stand alone city of palaces and churches built on 117 islands linked by nearly 400 bridges with canals instead of streets and boats rather than cars and buses. Unique unto its own, dependent on the sea, Venice went well beyond Italy’s borders looking across the Adriatic to the East rather than Western Europe for her power and prestige. A cosmopolitan city for her time, Venice was different. Her ruler was called the Doge. He wore a funny hat called a corno ducale  and was elected from the ranks of the aristocracy and could only rule with the support of the aristocrats and the common man. The influence of the East brought a certain exotic elegance to Venice as seafaring merchants and traders brought their goods and services to Venetian ports. In Venice artists and painters, printers, ceramists, glassworkers, woodworkers, lace makers, goldsmiths and sculptors were considered professional artisans and unlike many other parts of Italy where artists were funded in part by the Church or commissioned merely for the honor (without remuneration), the artisans of Venice were paid for their work and produced prolifically.

A city with such a lineage merits a vocabulary of its own to describe all the nuances of living in La Serenissima, beginning with the Italian word for house casa.

ca‘ — the abbreviated form of the word “casa” used for the noble palazzi of Venice, once private residences now museums that line the Grand Canal.

calle – (pronounced ca-lay), the most commonly used word for street, known as via or strada elsewhere in Italy. There are numerous variations.

campo – everywhere else in Italy a square is called a piazza while in Venice the only piazza is Piazza San Marco ; all other squares are campi from the Italian word for field or meadow. Almost every one of Venice’s campi carries the name of the church that is or was associated with it.

piano nobile – the reception floor of a palazzo above the androne.

rio terrà – a filled-in canal now used as a street.

fondamenta – a walkway along the side of a rio.

salizzada – meaning “laid with cobblestones,” so any street you see in Venice prefaced with salizzada was one of the first streets in Venice to be paved.

sottoportego – a passage under a building. 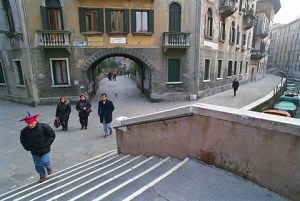 It is well know that the foods of Italy are local reflections of the culture and traditions of the region and all have their own regional names. Long thick strands of pasta are called stringozzi in Umbria, pici in Tuscany and bigoli in Venice. The exotic spices of Byzantium and the East flavored, colored and named the food of Venice with dishes like baccalà mantecato (creamed cod), risi e bisi (rice and peas), sardee in saor ( sweet and sour sardines with onions, pine nuts and raisins) and fegato alla Veneziana (liver and onions ). All but preludes to the notorious Venetian pastries that like the arabesque architecture and gilded mosaics reflect the sweet, serene, stunningly beautiful life of Venice.

The Art of the Towel

The Medici, Magi and “Opus Benozzo”

The Wise Men of Ravenna

Three Wise Men and a Witch