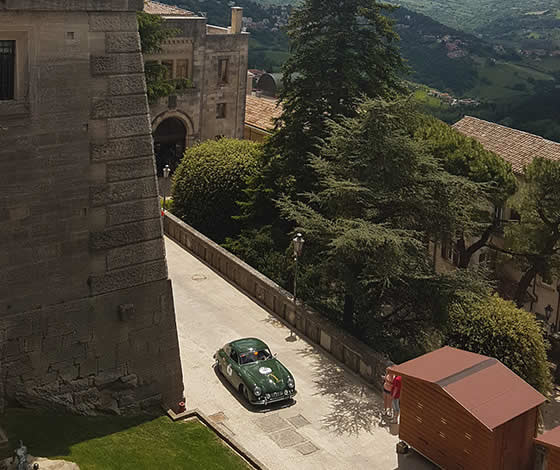 The 103rd running of the Indianapolis 500 is about to begin. Labeled “the greatest spectacle in racing” it is one of the iconic races of the world. This year Mario Andretti, an Italian-born American racer who over a five decade long career, contested the Indy 500 an astonishing 29 times and won in 1969 will be celebrating that 50th anniversary win at the brickyard.

Italians are no strangers to speed . The past and current history of Italian auto racing from Monza’s Grand Prix to Italy’s Mille Miglia, a thousand mile open endurance race notorious for fast cars and fatal crashes, may have began with the fast and furious chariot races of Rome. But the allure of Italian motor racing goes beyond the sound of carburetors and the endurance and courage of its drivers. There is a beauty in Italian racing that extends from the exquisite design of Italian coach builders (carrozziere) to the course itself.  The Mille Miglia, known as the most beautiful race in the world, begins today on a figure-eight route from Brescia to Rome passing through some of the most beautiful cities and scenery in Italy including Verona, Vicenza, Padua, Siena and Mantua. Known as la corsa piu bella del mondo the race was first run in 1927 winding, climbing and driving through the classic countryside of Medieval and Renaissance Italy.

Citizens, fans, well-wishers and sightseers crowd along the route in amazement as 430* of the most fantastic cars on the planet drive by. Picnics and lunch breaks are a very Italian part of the race that began on Monday with a Holy Mass and blessing of the cars at the Duomo Vecchio in Brescia. But before the end of the race drivers will endure long (13 to 14 hours) days of driving in all kinds of weather navigating en route with a 3 volume analog logbook trying to stay on course and avoid ending up on an old Roman rocky dirt road. Arriving  on Saturday’s Night of the Mille Miglia for the prize giving ceremony and a hero’s welcome as cars and drivers return from their epic journey.

*to be eligible for the race the cars need to have been created before 1957 and must have attended or be registered to the original race.

Basil – The Herb of Love

Christmas in Italy – 3 Wise Men and a Witch

The King of Hops In Italy for Octoberfest